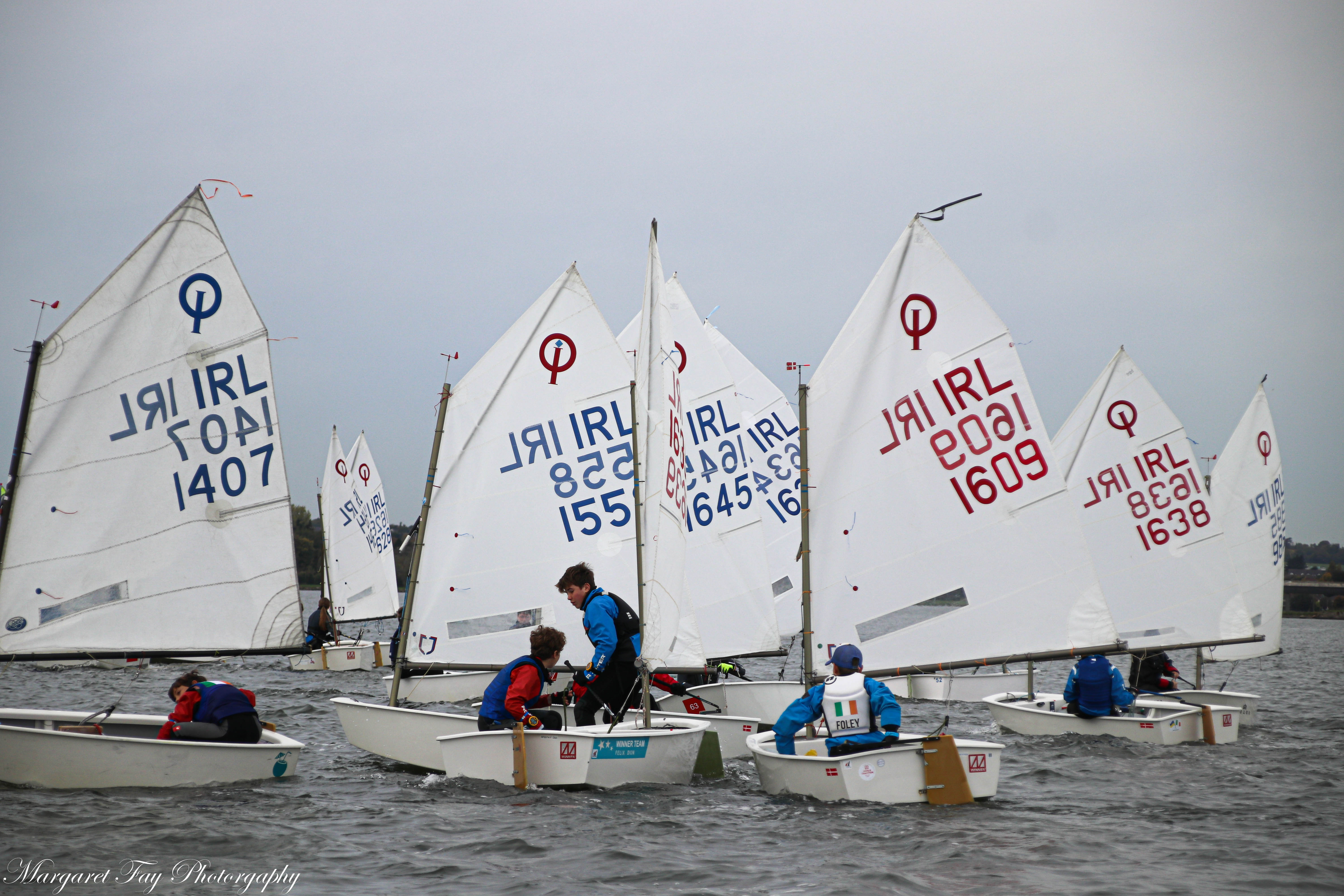 The annual Malahide Dinghy Regatta attracted over 95 boats from as far afield as Tipperary. The event which is usually held in August was moved to October to take advantage of the ideal sailing conditions on the Broadmeadows estuary at this time of the year.

The venue did not disappoint and neither did the huge volunteer effort required to stage an event such as this. Three highly competitive races, with seven different classes of boat, were run under the careful guidance of Race Officer Neil Murphy. In the largest class, the Optimist, sailed by the youngest competitors, it was the National Champion, Conor Cronin who was to the fore winning two out of three races. The newest member of the Topper fleet Súin NíChoistealbha (MYC) shone as she took first place. A clean sweep in the ILCA 4 class for the Royal St. George Yacht Club had Patrick Foley at the head of the pack and over in the ILCA 6 fleet the age old rivalry of James Anglim (MYC) and Sophie Kilmartin (MYC) was renewed with James just edging Sophie out in the last race this time.  Darragh Kelleher from Skerries Sailing Club led the way in the ILCA 7’s and the duo of Kate Campion and Amelie Soffe (MYC) take honours in the PY Fleet.

Meanwhile the Regatta Fleet sailors took to their Optimists in the estuary under the watchful eye of their Race Officer, Graham Smith. The youngsters of the sailing world are no less competitive and Arthur Fegan (MYC) was a clear leader with three wins out of four. It’s not all about racing in this fleet and prizes for sportsmanship and fair play are just as important a feature.

Both Commodore Ciaran O’Reilly and event Chairman, Paddy Ryan were delighted with the Regatta success  and agreed that it was testament to the phenomenal work of the volunteers and membership of the club.

Many volunteers, on boats, in the clubhouse, managing parking, helping the sailors, all made for a hospitable atmosphere and successful event.

A link to the results can be found here - https://www.sailwave.com/results/2022MYCDR.htm

We use cookies on our website to give you the most relevant experience by remembering your preferences and repeat visits. By clicking “Accept All”, you consent to the use of ALL the cookies. However, you may visit "Cookie Settings" to provide a controlled consent.
Cookie SettingsAccept All Reject All
Manage consent

This website uses cookies to improve your experience while you navigate through the website. Out of these, the cookies that are categorized as necessary are stored on your browser as they are essential for the working of basic functionalities of the website. We also use third-party cookies that help us analyze and understand how you use this website. These cookies will be stored in your browser only with your consent. You also have the option to opt-out of these cookies. But opting out of some of these cookies may affect your browsing experience.
Necessary Always Enabled
Necessary cookies are absolutely essential for the website to function properly. These cookies ensure basic functionalities and security features of the website, anonymously.
Functional
Functional cookies help to perform certain functionalities like sharing the content of the website on social media platforms, collect feedbacks, and other third-party features.
Performance
Performance cookies are used to understand and analyze the key performance indexes of the website which helps in delivering a better user experience for the visitors.
Analytics
Analytical cookies are used to understand how visitors interact with the website. These cookies help provide information on metrics the number of visitors, bounce rate, traffic source, etc.
Advertisement
Advertisement cookies are used to provide visitors with relevant ads and marketing campaigns. These cookies track visitors across websites and collect information to provide customized ads.
Others
Other uncategorized cookies are those that are being analyzed and have not been classified into a category as yet.
SAVE & ACCEPT