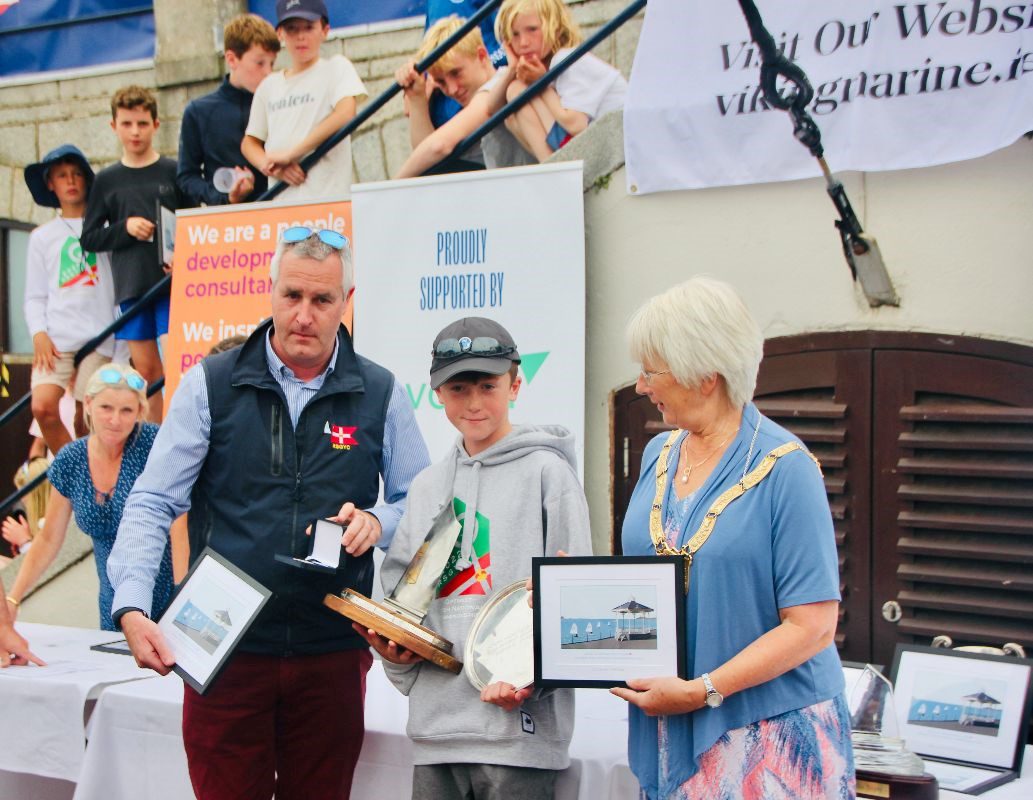 Massive congratulations to Conor Cronin who is the new Irish Optimist National Champion! An outstanding result for Conor (pictured above receiving his prizes) during his first year in the Senior Main Fleet and given the fact that he is just 12 years old (Oppie age 13!).

The Nationals were held at the Royal St. George Yacht Club in Dun Laoghaire. The four-day event kicked off in blistering sunshine last Thursday with light variable winds on Dublin Bay. On day one, race officers managed to get two races in across both main and regatta fleets despite the tricky shifty easterly conditions in a strong ebb tide.

On day two, the wind unfortunately did not materialize and just one race was sailed across the Junior and Senior fleets. On day three the sea breeze made an appearance and after a course relocation further out into the Bay, the main fleet were rewarded with a 10-13 knot easterly for their three races. The final day of the event brought further light winds and strong sunshine to Dublin Bay. The hope for race officers was for the Main Fleet to sail two races to bring the complete race schedule to eight races however just one race was sailed in a 5-6 knot northerly before the race officers were left with no choice but to send the sailors ashore as the breeze reduced to 2-4 knots.

The junior and senior main fleet consisted of 125 sailors with a strong contingent of visiting GBR sailors. Many of the sailors are coming to the end of a season following three Irish regionals, a European Championship, a Worlds event as well as French and UK Nationals.

Congratulations also go to Oliver Ryan, Alex Butcher and Aisling Cronin who finished in 2nd, 3rd and 5th place respectively in the 37-strong new Regatta Racing fleet in the Irish Championship. The sailors loved being out in the Bay and racing on a slightly larger course than they are otherwise used to. When the wind was not playing ball they were well looked after by Andy Cronin and crew who excelled in their roles on his lovely yacht, a fantastic mothership which at one stage hosted 35 young sailors on board! (pictured below)

Well done to all of the MYC sailors who represented themselves and our club so well, participating in what was a long tough event....all credit to Conor, Siun, Stan, Connor O', Nathan, Juliet, Paidi, Tomas, Patrick, Alex, Oliver, Aisling, Arthur and all of their parents for the massive effort put in before and throughout the duration of the Irish Championship!

Editor's Note: Conor is the third MYC member to win the Optimist National Championships, following the footsteps of Conor Nolan (1983) and Kenneth Hoffman (1993)

We use cookies on our website to give you the most relevant experience by remembering your preferences and repeat visits. By clicking “Accept All”, you consent to the use of ALL the cookies. However, you may visit "Cookie Settings" to provide a controlled consent.
Cookie SettingsAccept All Reject All
Manage consent

This website uses cookies to improve your experience while you navigate through the website. Out of these, the cookies that are categorized as necessary are stored on your browser as they are essential for the working of basic functionalities of the website. We also use third-party cookies that help us analyze and understand how you use this website. These cookies will be stored in your browser only with your consent. You also have the option to opt-out of these cookies. But opting out of some of these cookies may affect your browsing experience.
Necessary Always Enabled
Necessary cookies are absolutely essential for the website to function properly. These cookies ensure basic functionalities and security features of the website, anonymously.
Functional
Functional cookies help to perform certain functionalities like sharing the content of the website on social media platforms, collect feedbacks, and other third-party features.
Performance
Performance cookies are used to understand and analyze the key performance indexes of the website which helps in delivering a better user experience for the visitors.
Analytics
Analytical cookies are used to understand how visitors interact with the website. These cookies help provide information on metrics the number of visitors, bounce rate, traffic source, etc.
Advertisement
Advertisement cookies are used to provide visitors with relevant ads and marketing campaigns. These cookies track visitors across websites and collect information to provide customized ads.
Others
Other uncategorized cookies are those that are being analyzed and have not been classified into a category as yet.
SAVE & ACCEPT